Here’s one of the first shots taken last weekend in Goliad, Texas at the Mission Espiritu Santo de Zu iga, a beautifully reconstructed Franciscan mission from the 1700 s. A stone outside reads:

“Site of the Mission Nuestra Se ora del Espiritu Santo de Zu iga. First established at the site of La Salle’s fort on Garcitas Creek, Victoria County, Among the Coco, Cujanes, Karankawa and other indian tribes in 1722. Moved to Mission Valley, Victoria County, on the Guadalupe River among the Jaranames and Tamiques in 1826. Located on the present site in 1749 for the same indian neophytes. Secularized in 1794. Here Franciscan friars attempted to civilize and Christianize even the cannibalistic indians of the region. Erected by the State of Texas 1936.” 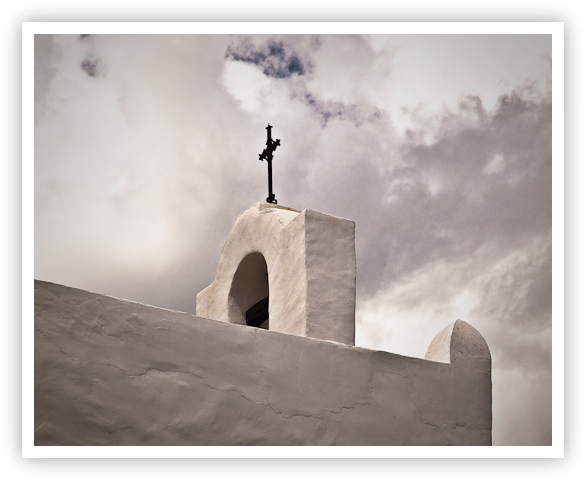 Mission Cross
Copyright 2009 Jeff Lynch Photography
Shot taken with a Canon EOS 5D Mark II set on aperture priority (Av) using an EF 24-105mm f/4 L IS USM tripod-mounted with a Singh-Ray LB warming polarizer attached. The exposure was taken at 105mm, f/8 for 1/250th of a second at ISO 100 on Lexar Professional digital film. Post capture processing was done in Lightroom 2 and Photoshop CS4. Click on the image above for a larger version.